Last week's unveiling of the world's first cultured beef burger got everyone talking about "Frankenburgers".  The "Franken--" prefix is often used when scientists start concocting things that were once more or less natural.  Articles about genetically modified foods are always about "frankenfood".  People even talk about "frankenbabies", in connection with IVF. 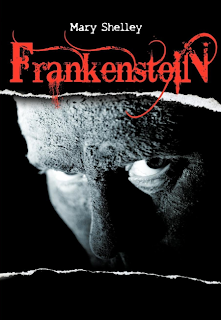 This summer I decided it was about time I read the eponymous novel, the original Frankenstein, by Mary Shelley.  Surely I've seen a Frankenstein movie or two, but honestly, I remembered very little from them.  In fact, I didn't even remember that Frankenstein is the scientist, not the monster (blush!).  So Frankenburgers are Frankenburgers because of their Frankenstein-like designers.  The monster actually has no name.

Speaking of the monster, his travails are the book's biggest surprise.  I always assumed he was innately monstrous, and the scientist was supposed to be fully to blame for the terrible outcome--the monster's murderous rampage.  When we tinker with nature, there's hell to pay--that was (I assumed) the message.  But no, no, no!  The monster is actually born innocent!  He seems dangerous when he first opens his eyes.  Frankenstein recounts--


It was already one in the morning; the rain pattered dismally against the panes, and my candle was nearly burnt out, when, by the glimmer of the half-extinguished light, I saw the dull yellow eye of the creature open; it breathed hard, and a convulsive motion agitated its limbs ... Oh! no mortal could support the horror of that countenance.  A mummy again endued with animation could not be so hideous as that wretch.  I had gazed on him while unfinished; he was ugly then; but when those muscles and joints were rendered capable of motion, it became a thing such as even Dante could not have conceived.

OK, so the monster is hideous.  But we later find out that he's completely innocent, and in fact kind, sensitive, and a lover of virtue.  Frankenstein cleverly runs out of his apartment in horror, not bothering to lock the door. The monster leaves and makes his way to the country, hiding in a hovel from which he observes a family who live in a small hut. He becomes their secret angel, bringing them firewood and food. He loves the good he sees in them, and longs for their society. Knowing he's a horror to look at, he first introduces himself to the blind old father of the family, but sadly, others come home before he's secured the old man's friendship, and they all turn on him.  The same thing happens when he makes a second attempt to bond with human beings--his kindness is repaid with cruelty because he's so hideous.  This is what makes him seek revenge against Frankenstein, not any innate monstrosity. And we even learn, at the end of the book, that he never enjoyed killing off Frankenstein's loved ones.

The moral of the story is not just that Frankenstein got carried away in his laboratory. Yes, he did, but the message is not "scientific over-reaching makes monstrosity"; the message is "scientific over-reaching PLUS human prejudice makes monstrosity."  Without the prejudice, there wouldn't have been any monstrosity.  The world would have just had one more citizen, a humanoid fashioned out of dead parts, and not nice to look at, but sociable, and good, and virtuous.

The real message of Frankenstein, then, is "watch out for unbounded science" and  "watch out for prejudice."  If the new cultured beef burgers are "Frankenfood" that doesn't mean they're inherently problematic (if you appreciate the prefix in the context of the novel). They could be all to the good, and we could just be prejudiced against them.

Now, it would be nice to end this little foray into 19th century horror fiction with a "hip hip hooray!" for cultured beef burgers.  A nice, clear conclusion would be "We should drop our prejudices against lab meat and welcome the cultured beef burger.  After all, they certainly have many advantages--they can fulfill the human desire for meat while causing no animal suffering and using up far fewer resources.  Yay!"  Unfortunately, I'm about to take a hair-pin turn here.  Prejudice is bad, and maybe we do feel prejudiced against lab meat.  But is our negative reaction to lab meat mere prejudice?

Another book I've been reading this summer is Cooked, by Michael Pollan.  This is a wonderful book on many levels--especially for people who love to cook.  Pollan is a great writer on what you might call the "meaning" of food.  He writes about what we want from food, what we value about it.  Reading Pollan, you start to realize that we want certain sensations from food, certain tastes, but we want much more.  When we eat, we want to have various thoughts and associations.  Some desirable thoughts (not all consistent with each other) are-- Frankenburgers wouldn't allow us to have a food experience with the right penumbra of thoughts, feelings, and associations. If we care about all these other dimensions of food experience -- we want food that's from the garden, homemade, rooted in long-standing culture, artistic, shared by family and friends -- is that prejudiced in the nefarious, Frankenstein-the book sense?   I think not.  I'm not drawn to Frankenburgers,  like I am to the lentil salad I'm about to eat for lunch, and I think that's for respectable reasons.  So yes, prejudiced be damned ... and that's one of the messages of Frankenstein.  And yes, we shouldn't reject Frankenfood for reasons of mere prejudice.  But people's doubts about it are not entirely a matter of prejudice.

Puzzle:  how is it that food can have good Pollanesque associations if you know it comes from the bodies of formerly living animals, who were killed so you could eat?  Pollan's book is quite unapologetically meaty.  Joy of eating, for him, doesn't preclude killing.  That, in itself, is food for thought.

As a reminder, Carol Adams has a nice essay on Frankenstein and vegetarianism in her The Sexual Politics of Meat. I don't have much to add here, but it might be interesting to think this alongside Frankenburgers.

Cool, I'll go look at that. She's a good 19th century literature person (author of a book about Jane Austen).

Carol Adams has been busy. I now see that she has written a whole book on Frankenstein and the monster.

What? I'll go look for that. I just read her chapter, which was interesting. I'm ashamed to say that I didn't notice the monster was a vegetarian. Indeed he is! It's part of his innocence, before he gets mad at everyone.

Whoa, I didn't know she had a whole book on Frankenstein. I will have to check that out sometime.

I love how the movie expresses this theme: The monster reaches up to the light, but people won't let the monster be good.

Perhaps the 'franken' prefix is not what's problematic so much as the word *burgers*, which implies more of an end-product.

Some of those arguments you mention against frankenburgers apply to quite accepted ingredients for cooking, such as refined sugar. Refined sugar is typically not made at home, isn't how people have been eating for thousands of years nor how wild animals eat.

But if I make home-made jam with it, or ice cream, using strawberries that grew in my garden, I have plenty of positive associations.

Lab-grown meat could similarly be seen as an ingredient to home-cooked food, as opposed to an end product.

So I think lab-grown meat could potentially draw out some of the food associations in some circumstances.

It's an interesting story too about how Frankenstein was written, with Lord Byron and Percy Shelley involved.