Was I once an egg?

Short recap of the Marquis argument I was responding to in my last post: Marquis says killing one of us is wrong because it takes away a FLO (future like ours). But abortion takes a FLO from a fetus.  So abortion is wrong too.

Here's a response to Marquis I find intriguing/bewildering.  Eugene Mills says if I was once a zygote, I was also once an egg.  I wasn't also once a sperm. No, I was just once an egg.  So if it's wrong to take the FLO from a zygote, it's also got to be wrong take the FLO from an egg.  We have to be deeply concerned about using contraception to block conception.  That's (surely) absurd, so there must be something wrong with Marquis's stance on abortion.

Was I really once an egg? An editorial in the New York Times last summer, written by a biologist (so he should know!) says yes, I really was.  Greg Hampikian writes (here)

After the two of you left Grandma’s womb, you enjoyed the protection of your mother’s prepubescent ovary. Then, sometime between 12 and 50 years after the two of you left your grandmother, you burst forth and were sucked by her fimbriae into the fallopian tube. You glided along the oviduct, surviving happily on the stored nutrients and genetic messages that Mom packed for you.
Then, at some point, your father spent a few minutes close by, but then left. A little while later, you encountered some very odd tiny cells that he had shed. They did not merge with you, or give you any cell membranes or nutrients — just an infinitesimally small packet of DNA, less than one-millionth of your mass.

So (says Hampikian/Mills) I go back a long way--to child-me, to baby-me, to fetal-me, to zygote-me, to egg-me.  There is one continuous entity there, though picked out by different terms at different stages (child, baby, fetus, zygote, egg).  The sperm is crucial for making me go on from being an egg to being a zygote, but there is no symmetry here.  I was once an egg but I was never a sperm.  Importantly, the sperm does not induce "substantial change". The sperm does not make one thing go out of existence (the egg) and a second thing come into existence (the zygote). One thing is prodded to continue existing, because of the sperm, instead of a new entity coming into being.

Now, here's why I'm bewildered:  Mills and Hampikian say I was once an egg, but when I look closely at the "facts of life" it doesn't look to me like this is true.  Watch the crucial clip of this video, which was made by what appears to be a reliable medical media company.  Sperm penetrates egg. As a result, the sperm generates a haploid pronucleus and so does the egg.  Each pronucleus appears to be a separate entity--EP and SP, let's call them.  They then fuse, forming the diploid cell, Z.  If EP and SP are two distinct entities, and they fuse, the logic of identity precludes saying that Z=EP. No, EP and SP go out of existence; Z is a third and new entity.

Here are the crucial frames.  There are two separate entities, EP and SP; they are pulled together by "threads" and fuse. 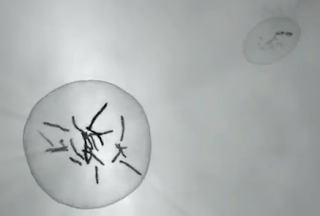 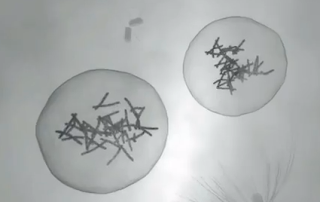 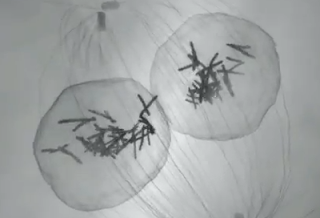 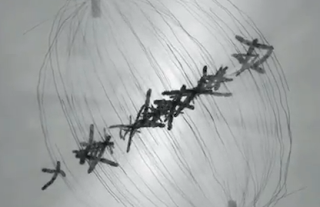 In this clip, the egg is just the site in which EP and SP fuse, forming the new entity Z.  Z is inside of the egg, not identical to the egg.  We are invited to think Z is the start of a new human being, not the containing egg.  In fact, the narrator calls the newly formed single cell a "zygote", instead of using that term to refer to the whole fertilized egg.

Another video tells the same story.  Here's the crucial clip of that video with the key frames below. Again, separate pronuclei exist inside the egg and fuse. 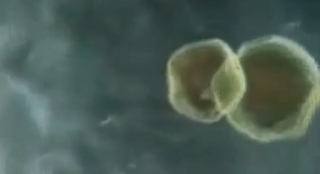 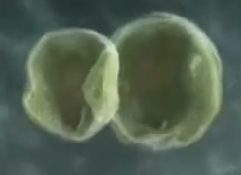 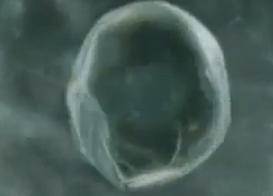 Once again, this diagram of fertilization tells a story that suggests two entities fusing to generate a third-- 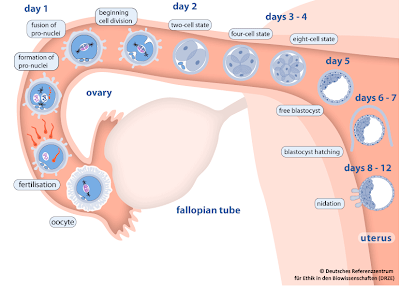 From what I can see, Story (1) is true: EP and SP fuse to become the diploid cell Z, a whole new thing.  Z develops inside the egg, using some materials from the egg.  If you were once any entity in this complex, you were once Z, not the larger, containing egg.

Can you read things any other way?  I guess the eggcentrists see it this way:

Story (2): The egg lives on, after fertilization, just altered profoundly.   Both EP and SP go out of existence, after forming Z, but the egg keeps growing.  Getting Z as its nucleus does not cause substantial change in the egg, making a new entity come into existence.  No, it's the same ol' egg, just doing some amazing new stuff.  If you were once any entity in this complex, you were once the egg, with EP, SP, and Z just very important parts of you.

At the very least, I think Story (1) is coherent. Nobody has to read the biological facts as Story (2) has them.  I can reasonably think my earliest life was as Z, not as an egg in my mother's ovary.

There's another way to block the idea that I was once an egg in my mother's ovary.  Marquis actually says it may not be true that I was once a zygote--the entity that exists in the first 14 days after fertilization.  He doesn't explain the basis for his doubts, but I would speculate he may be drawing on the very interesting book When Did I Begin? by Norman Ford.

Ford argues that in the first days, a zygote is a collection of separate things, not a unified, single entity.  In the first few days, it's so ununified that each cell can develop into a separate entity (making for identical twins, quadruplets, or octuplets).

Bottom line: I was never an egg. No, condemning the killing of a fetus does not drive us to the absurdity that we mustn't block the fertilization of an egg.  You can say a fetus has a FLO but an egg doesn't, because it's not true that we were once eggs.  There is no continuous entity that starts off existing before fertilization and continues for the first 14 days and then for the duration of pregnancy, and then through ordinary life, so that it has a FLO. If you want to refute Marquis, you need something else besides the idea that his reasoning turns contraception into murder.

I don't follow the "logic of identity" step. The zygote contains the makings of my left arm, too. Is my left arm me? No, not in the way that we conventionally understand "me" and "arm", even considering the vast fuzziness in the term "me". My arm is surely part of me, though.

So what is wrong with my placenta also being part of me? I am still me after I lose an arm, and my placenta is only different insofar as it is a natural, expected loss.

.If A is the source of two separate entities, B and C (neither a part of the other), then it can't be that A=B or A=C. My whole body and my left arm aren't separate, so this principle doesn't tell us anything about whether a zygote is identical to one or the other. Now, you can also avoid applying the principle to the case of the zygote, my whole body, and the placenta, if you think the placenta is a part of me (like an external organ?)...so, OK, fair enough! I do find that an odd idea though. I don't think it would ever occur to anyone to see the placenta as a part of a fetus, if they weren't trying to fend off this argument against seeing zygote and fetus as the same entity.

I was about to compare the placenta to a fingernail which eventually gets "cut", but that's not a good analogy because (among other reasons) fingernails don't contain genetic material. Another analogy would be to compare the placenta to the appendix which, in some alternate universe of human evolution, is lost naturally. Say, one day around the age of puberty we spontaneously poop it out. Calling the placenta an external organ is right on, because that's really what it is, if we are zygotes and placenta-fetus-entities.

But even accepting your premises, in general I'm uneasy with using things like the logic of identity when a continuous transformation is involved, like a developing zygote. To demarcate this thing from that thing often amounts to an almost Platonist metaphysical position, when in reality we have a complex biological process that -- especially over time -- does not map 1-to-1 with our concepts. The Zen Buddhist in me tries to maintain a distinction between the-world-as-it-is and the-world-as-it-is-perceived-and-demarcated-by-us.

I share Craig Urias's frustration with the concept of an entity as anything more than an envelope of convenience which we use to demarcate some subset of our experience.

Fertilization may or may not be a useful point of demarcation so long as we discount the possibility of parthenogenesis, but any useful concept of identity for living organisms should surely be capable of distinguishing a parthenogenetic clone from its mother.

I suspect that there is no absolutely "correct" place to draw the boundary of when a "person" begins and that the question is really just where there starts to be a good reason to treat it as something with "rights". I don't have human rights because by some logic I am a person, but rather I am a person because it makes sense to assign me those rights.