We started in San Francisco and then drove over the Golden Gate bridge to Sausalito and up the coast to Point Reyes seashore and then to the redwood state and national parks near Oregon, with a couple of nights of camping in Jedediah Smith State Park. OK, I confess -- a couple went from 3 to 2 because we couldn't face putting up a tent in the pouring rain on the first night.  Anyhow, trees.  Wow, redwoods are big! 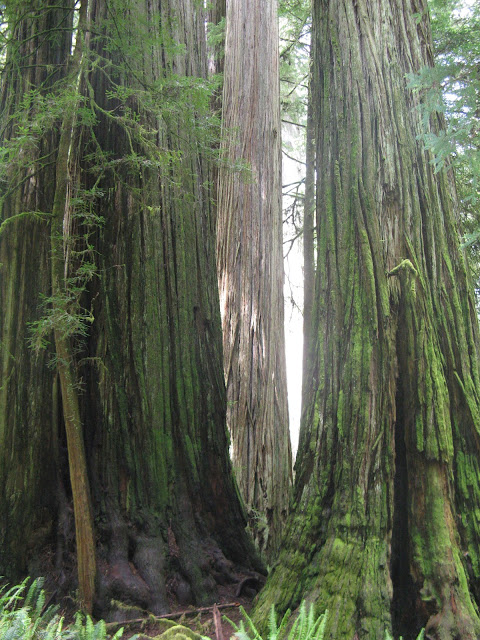 I got really fascinated with these trees, so acquired a nice little library of books about trees on the road.  First came Coast Redwoods: A Natural and Cultural History, from which I learned about "burls" and "fairy rings."  A redwood deals with the threat of destruction by developing this growth called a "burl" (do other trees do this too?).  This is a big protrusion that looks sort of like tree ooze, or even a tumor. Inside the burl there are thousands of dormant buds.  When the "stem tip" (not sure what that means) of a tree is severely damaged, the buds "wake up" and send shoots down to the base of the tree.  A group of trees then grow in a circle around the original tree, all clones of the original.  This is known as a "fairy ring" or "sprouting ring."  Once I learned about fairy rings I got just a big obsessed with finding them, and they seemed to be all over the place.  Lots and lots of redwoods grow in circles.

Having fallen in love with redwoods, I wanted to test my fidelity by seeing some sequoias too, but that's jumping ahead.  From Jedediah we headed south through wine country (where we discovered not more trees, and not wine, but perfect cappuccino in towns like Calistoga).  We headed further south to Monterrey and then over to Salinas to visit the John Steinbeck museum and e.b. ("eyeball") the vast vegetable farms.  Picking up an armload of Steinbeck books in the museum bookstore (to be exact: one for me, one for my daughter, three for my husband, none for my son), I read this wonderful paragraph by Steinbeck in Travels with Charley: 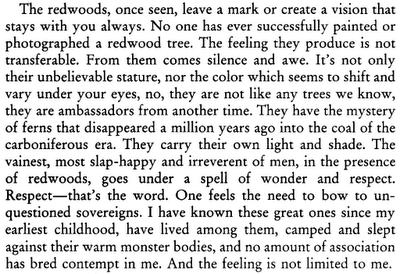 "Respect--that's the word."  Interesting thought, much in line with Paul Taylor's well-known book Respect for Nature.  Taylor thinks living things have a "good of their own" and this entitles them to our respect.  If you're steeped in Kantian talk about the prerequisites of respect, you might find this very odd.  What?  Respect a tree, when trees lack our self-awareness?

But wait--even Kant respected things without self-awareness. “Two things fill me with wonder,” he famously said, “the starry sky above and the moral law within.” OK, he just said "wonder" here, but I have the feeling "wonder" means something like "awe" and "awe" means something like "respect".  Note how Steinbeck puts these things in one package--"The vainest, most slap-happy and irreverent of men, in the presence of redwoods, goes under a spell of wonder and respect."

My loyalty was rigorouly tested by the sequoias.  After e.b.-ing lots of vegetables in Salinas, we headed back to the coast and drove down to Morro Bay.  Suitably awed by the large rock in the bay (and the unexpected but also sort of awesome power plant), we headed west to Yosemite National Park, stopping to enjoy the avocado orchards and assorted dramatic landscapes on the way. Sequoias are -- humongous, ginormous ... you seem to need new words to describe them.  But burls and fairy rings? No!  There is also something singular about the height of redwoods, their completely erect posture, and how far you have to look to find their branches.  "One feels the need to bow to unquestioned sovereigns" ... 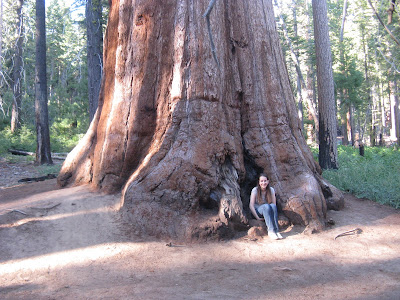 I'm going with the idea that respecting trees does make sense, but we've got to reject one idea about respect if we're going to apply the concept this way.  Kant and Taylor both see respect as an equalizer. If you respect X and respect Y, then you've got to respect them equally. If your respect dictates you have to protect X, then you have to protect Y to the same degree.  In my book about respect for animals, I reject that sort of egalitarianism as it applies to members of different animal species, and you're going to be even more obliged to reject it if you think trees and other plants are owed respect.

Speaking of the trees in my backyard, Steinbeck says something very funny about Texas.

Yes, some people never make it out.  Or rather, they make it out, but then they return.  I shouldn't complain.  There's actually a creek behind our house, lined with trees. I have never bothered to take a close look at them, but there are some cottonwoods that blow tufts all over the place.  Once back in San Francisco, we went to the famous City Lights book store and I got a very lovely book by super-nature-writer Bernd Heinrich called The Trees in My Forest.  Turns out ordinary trees (as well as vines, bushes, and little ground plants) do some pretty extraordinary things.  I also learned more about redwoods from him -- like how one can speculate that they got so big to avoid the rapacious appetites of dinosaurs. Cool.

Last but not least, and not on a tree-ish subject, some "bests" and "worsts":  best restaurants on our trip were Greens and Lulu Restaurant, both in San Francisco, Good Harvest Cafe in Crescent Bay, and The Galley in Morro Bay. Most dubious accommodations: Curry Village, the refugee camp-like tent city in Yosemite.  Better to book as early as possible and grab yourself a campsite or room at the lodge. Best avocado orchard: near Morro Bay. Coolest coast walk: Point Lobos near Monterrey.  Most insanely rich but picturesque town: Carmel.  Best family-style restaurant chain with great pie: The Black Bear. Best spooky location for trying to watch the transit of Venus (but the clouds got in the way): the lighthouse near Crescent City.

Just a few more trees and we'll be done: 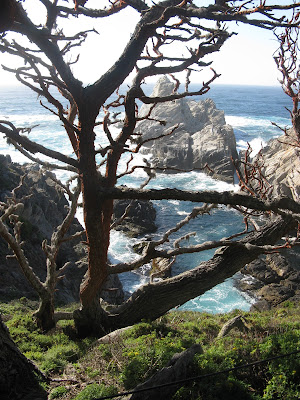 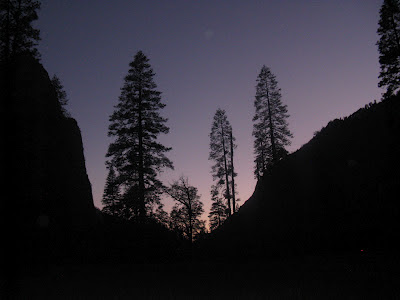 Excellent post and blog! So nice to hear a voice of reason that also appreciates the beauty of nature. As a native NorCalian who has traveled extensively around the States and the world (currently in Tokyo) there is no place I'd rather be than back home. The redwoods are gorgeous; My dream is to make my way back and live quietly near them.

Thanks again for your outstanding blog

Good blog! I am curious though why you reject equal respect? A speciesist position is hard to defend...Singer and others reject a human centric view of value, and anyone spending significant time outside of human constructs feels the wisdom of this view quite intuitively...man simply is not the measure of all things...