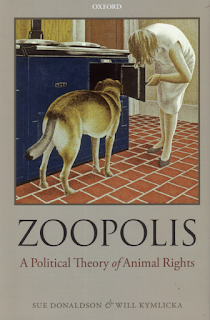 Final post. This is the book that everyone in animal ethics ought to be talking about, and no doubt will be talking about in the fullness of time. You need to read it, if you're interested in the moral status of animals.

The plot, if you haven't been reading my posts on the book:  Donaldson and Kymlicka argue that all animals have basic rights, but that they also have further rights, depending on which of three categories they fall into.  The very original suggestion of the book is that the crucial categories are political, not merely moral. Animal companions are entitled to full citizenship within their "home" country.  Wild animals should be treated like separate and sovereign nations.  Then there are "liminal" animals who depend on humans, but aren't in a cooperative, mutual relationship with them. They're the resident aliens, akin to migrant workers. They're entitled to denizenship, but not citizenship.

Are they serious? Do they think dogs should be citizens, or are they just a bit like citizens?  Should we regard Grizzly Bear Nation as really another nation, or just analogous to Cherokee Nation (for example)?  Are rats really resident aliens, or is this just a metaphor?  The authors opt for "really" in all these cases. I think this is where the book is most vulnerable.  They have a very detailed and perceptive discussion of the human side of each parallel--human citizenship, sovereignty, and denizenship are discussed with great detail and subtlety.  They also discuss animals, and the animal-human relationship, in enormous and fascinating detail. What's not so convincingly defended is the idea that the categories are more than metaphorical--that they're literally a good fit.

For example, it seems like no more than a metaphor to say that people are engaged in "ethnic cleansing" when they exterminate rats (liminal animals).  I can sort of see the connection between rats and squirrels and resident aliens -- it's not so off base that I'm utterly baffled.  But still ... Ethnic cleansing, literally? When rats are removed from a basement, they become refugees, they say.  Or do they just become like refugees? To get from "like refugees" to "refugees" seems to require some pretty heavy-duty anthropomorphizing.

There's lots of anthropomorphizing in this book, as much as I hate making that tired charge. For example, when they're making their case for wild animal sovereignty, the authors frequently talk about animal "communities".  We are to respect the autonomy of elephants in the way European colonizers should have respected the autonomy of first peoples.  But "community" is a bit loaded.  A human community conceives itself as a community and aims to preserve itself as a community.  A herd of elephants, or school of fish, of flock of flamingos--these are all cohesive groups, to be sure. But are they really "communities", exactly?  Are they communities in the sense that would be needed to conceptualize the duty to respect elephant autonomy just as we conceptualize the duty to respect native American autonomy?

The very long discussion of animals fit for citizenship is rather anthromorphic too.  When we have rules prohibiting companion animals in restaurants, that's demeaning to the animals, they say, like it's demeaning keeping blacks out of restaurants.  It makes dogs second class when they have to be tied up outside.  Sort of!  But exactly?  In a discussion of sterilizing dogs, they talk about animals wanting to have families. Do dogs ever really want to have families--if you use that phrase literally? Do dogs even have families, in the sense that people have families?  Sure, they reproduce.  But do they have families?

The are lots and lots of examples like this.  My sense is that the authors have achieved a very high degree of clarity and precision, in their account of our duties to animals. Once we see elephants as members of Elephant Nation, we much better understand what we should and shouldn't do. Once rats are thought of as being like migrant workers, our duties toward them are much clarified.  If dogs are citizens, that tells us a great deal about how we must treat them.  But this is a bit like the maneuver of pro-lifers. Instead of having an ethics for what a fetus really is (an intermediate entity that truly is in a grey zone), they say a fetus is straightforwardly a person, from conception onwards. Then the ethics of abortion becomes a whole lot more manageable. But (ahem) who really thinks a fetus is a person?  I wonder if anyone really does, in their heart of hearts.  Likewise, everything will be much clearer if we can convince ourselves that whales comprise Whale Nation, or that our cats are fellow citizens.

Regardless of my worries, I really enjoyed this book. It's extremely well written and carefully argued, and stuffed with fascinating observations about humans, animals, and the relations between them.  Another reason I enjoyed it is that it felt a bit like science fiction--as I read, I was able to imagine a completely different world from ours, one in which animals are seen as fellow citizens, resident aliens, and "foreigners".  Dream novel:  Margaret Atwood reads Zoopolis and creates a fictional world like that.  Question: is it a utopia or a dystopia?  Would it be all to the good to alter reality in this way, or in some ways bad? 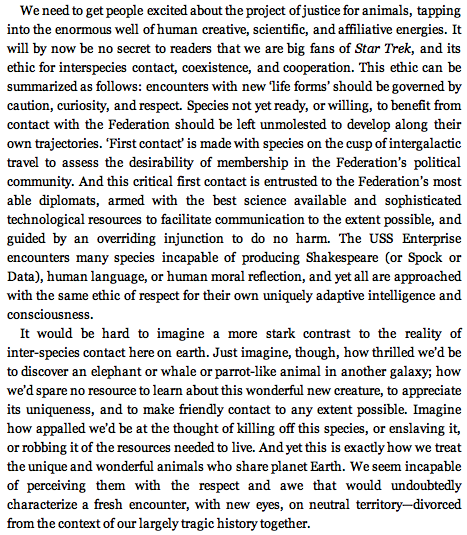 But there is a HUGE difference between first contact in Star Trek and our interaction with animals. They're dealing with sentient intelligent life. We're dealing with sentient life, that can't be reasoned with, can't respect our treaties etc. Kirk and others were still eating meat (I'm hesitant to include Post TNG since they had replicators to make their meat... But I remember that Voyager had a garden and was always looking for supplies... and enslaved "biogels" as part of their ship.)

"But (ahem) who really thinks a fetus is a person? I wonder if anyone really does, in their heart of hearts."

Oh I think lots and lots of people do. Since the term "fetus" is used to refer to the developing entity between 12 weeks and birth, there is a very significant period where legally, medically, and indeed morally people are very disposed to give "fetuses" significant "personhood" cred. Now how about "embryos" or "blastocysts?" Maybe a different story.

I do think you are right to bring up the example though. As I see it we have this ideal entity called a "person" that serves as our grounding for the grant of rights. This category "person" sometimes gets morphed into other softer or more generalized forms such as "sentient creature" or "creatures with a particular set of capacities." But as far as I can tell all roads lead to some "suffering agent" that gets granted dignity, and all appeals to moral rights involve seeing some entity as possessing the relevant special ingredients.

The problem of course is that these qualities can be mapped to a continuum and thus we get increasingly "metaphorical" as we deviate from our master version of "a person." Fetuses, coma patients, alzheimer's victims, and cute fuzzy mammals leave us scratching our heads as we try to hook them up to the "intrinsic" moral worth of the "person."

Wayne, Yeah, true, and I can't help but think being able to negotiate and respect a treaty is important. D&K will no doubt argue it isn't, based on reflections about people with intellectual disabilities, but here's what occurs to me: our intuitions about the disabled have everything to do with facts like how many there are and how they're related to us. If you change that, intuitions change very quickly. For example, suppose there's a nearby planet of 100 billion intellectually disabled humans, none related to us ... Exactly what moral status would we assign to such people? Not the status we assign to the disabled here, who are both in a small minority and related to us.

Faust, Whoops, I think I didn't know "fetus" was used to restrictively. I was really wondering whether anyone seriously thinks an embryo at 8 weeks or so is a person. I suspect people really think they're ... well, not sure.

Apart from what Wayne writes above, I don't think the quoted excerpt is particularly insightful.

Species not yet ready, or willing, to benefit from contact with the Federation should be left unmolested to develop along their own trajectories. 'First contact' is made with species on the cusp of intergalactic travel [sic]... .
The problem with this is that other species that share our planet just cannot be "left onmolested". Because we do share the same planet (which is not the case in the Star Trek example), we cannot avoid interfering with each other. 'First contact' has already been made, at the time when our species first began to exist.

[The error is that ST 'first contact' is based on interstellar travel; ST takes place entirely in our own galaxy.]