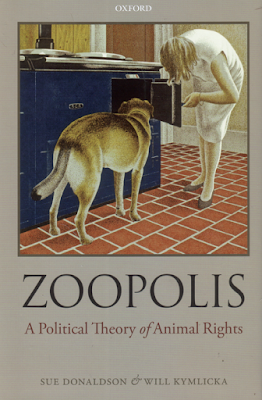 It's been a while since I've read anything on animal ethics that's new and different, but Zoopolis, the new book by Sue Donaldson and political philosopher Will Kymlicka, is new and different -- and well worth reading.  I'm going to "live blog" the book a bit, as in: write about it as I continue to read it (I'm about 1/3 of the way through).

Zoopolis is a work in the rights tradition of thought about animals--the tradition that says animals have the type of inviolability ordinarily assigned just to human beings. Animals are not just morally considerable. It's not enough to say their interests deserve equal consideration.  According to ART (animal rights theory), they are not to be sacrificed even if that would be for the general good. All this is really the starting point of the book, though the authors do devote a chapter to supporting the claim that animals have robust rights.

The main point of the book is that fully characterizing the rights of animals requires putting them in the same political categories we use for human beings.  When people step off a plane in some country (their example), they are treated very differently depending on whether they're citizens of that country, or citizens of a different sovereign country, or resident aliens. D&K propose that domesticated animals like dogs and cats have rights based on their being our fellow citizens.  Wild animals have rights based on their being like citizens of a different sovereign country.  And "liminal" animals (like rats and squirrels) have rights based on being akin to resident aliens. (What rights?  I don't know yet--that's the topic of the chapters I haven't gotten to.)

The authors are parting company here with abolitionist author Gary Francione, who argues that domesticated animals are in a condition of slavery, and would go extinct in an ethically ideal world.  D&K criticize him for not recognizing that domestication is partly a result of animal agency.  Animals like wolves gravitated toward our world for what it offered them.  They naturally evolved toward dependency and neoteny.  Those are not inherently bad things, and not inconsistent with living a good life--D&K argue.  They complain that Francione sees indignity in dependency, thereby also denigrating people who are dependent on others due to a disability.  Furthermore, they point out that "liminal" animals are dependent on us too, without our deliberate intervention.  So a full account of animal rights needs to be a nuanced account of the animals among us, and should not idealize a complete separation between humans and animals "out there," flourishing apart from us.

All the stuff on domesticated animals in this book is interesting and very persuasively argued, but let's back up.  As much as the authors want the reader to buy into basic rights for animals, and move on to their topic of political categories, I can't help but focus on step one.  The first chapter is a very useful statement of the case for animal rights, which starts by making it clear what's at stake.  The issue is not just whether animals "count," or they're morally considerable, or their equal interests should receive equal consideration. The AR theorist says something much stronger: that animals are inviolable--their good cannot be dispensed with even if doing so would be for the general good.  Rights are precisely protections against that sort of subordination to the general good.

It is a huge deal to grant that anyone has rights, in this sense of a shield that makes the individual inviolable.  One individual's rights put limits on the behavior of everyone else. These could be limits that are life-changing or even life-costing.  Because of these enormous ramifications, I find it striking -- in fact, amazing -- how little it takes for an individual to have rights, on D&K's view.  All it takes, they say, is selfhood. Here's one way they put it --


"...[W]e believe that respecting inviolability is, first and foremost, a process of intersubjective recognition -- that is, the first question is simply whether there is a 'subject' there, whether there is 'someone home'. This process of intersubjective recognition precedes any attempt to enumerate his or her capacities or interests. Once we know there is someone home, we know we are dealing with a vulnerable self, a being with subjective experience whose life can go better or worse as experienced from the inside. And so we know we should respect their inviolable rights, even before we know their variable capacities such as intelligence or moral agency."

As soon as "we know we are dealing with a vulnerable self" we also "know we should respect their inviolable rights."  Self, therefore inviolable rights.  It's incredibly simple. And of course, this secures animal rights, since we do experience intersubjective recognition with animals.

Setting aside the question of animals, does this "self --> rights" story really make sense?  Take the classic situation rights are supposed to resolve.  Five people need organ transplants.  Another person, Frank, walks into the hospital at just the right time.  Can we dismantle him and distribute his organs, to save five?  Here's the situation, as D&K see it--

We look at Frank, intuit a subject, a self, and so realize we must respect his inviolable rights.  We can't remove his organs to save Alice, Bob, Carol, Dan, and Ellen. The problem is that the real situation is this--

All the potential beneficiaries of the transplant are selves too.  I don't see how it can be the selfhood of Frank, all on its own, that reveals to us that we must grant him an inviolable right, thereby forcing us (effectively) to side with him against the other five. Doesn't the selfhood of the others also make a bid for our concern?  If we really focus intently on selfhood and set aside all our preconceptions about what's permissible here, couldn't the selfhood of Alice give her a competing right--for example, a right to equal consideration of her interests?

The personhood account of rights is the only alternative D&K consider. This view is also supposed to account for why Frank can't be dismantled, but bars at least most animals from having rights. I'm not questioning the selfhood view because I support the personhood view. In fact, it strikes me as being just as hopeless.  The personhood of Frank makes a bid for our concern, tempting us to say he has rights and should be considered inviolable, but the personhood of the others makes a competing bid as well--again, maybe they all have a right to equal consideration of their interests.

So -- why does Frank have rights, and do animals have them too?  I don't find the book's answer promising.  Nevertheless, even if rights are actually nonsense upon stilts, and nobody has them ... or humans have them but animals don't ... animals are still morally considerable, and I find it plausible that the exact sort of consideration they're owed depends on the categories D&K proposes.  So I will keep reading. Stay tuned for more on the guts of the book -- the views on animal citizenship, etc.

I don't see that the "someone at home" category gets us very far. Surely there are different degrees of "being at home." My guess is that they have some idea of a minimal baseline "being at home" that is supposed to take care of the continuum problem?

"always" was supposed to be "all the way" (no coffee yet)